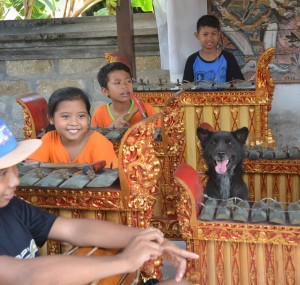 Sister  and Brother Made Emas and Wayan Anon have a special story – and it all revolves around music.
The two were taught traditional Balinese music ‘Gamelan’ by their father from a very early age.
Sadly, Made and Wayan’s beloved father passed away in 2014, leaving a huge hole in their life. They are looked after by their mother and uncle who run a small local sewing shop.
Their mother struggled to support them since their father passed away, but both children had their education sponsored by BCP. 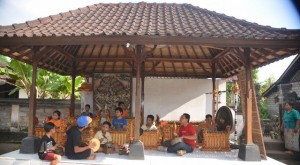 As a tribute to their father, Made and Wayan have embarked on an amazing story – to become the greatest Gamelan musicians they can.
Gamelan is a traditional a music meaning ‘to hammer’ is much more than ‘hammering’ instruments. A Gamelan orchestra is made up of multiple percussion instruments and his a huge part of Balinese culture. 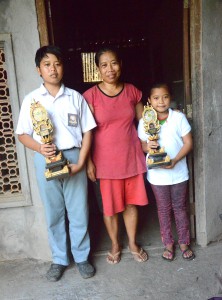 Gamelan Music is a common sound in many areas of Bali, with temples, ceremonies and special occasions all hosting the orchestras, which are often accompanied by traditional dance or puppet/shadow shows. Many restaurants and cafes play Gamelan CD’s to give their customers that authentic Balinese feel.
Now 10 and 15, the children both love their music. They play Gamelan every day – in the village, at home and even in school. They work their socks of to become the best they can and need no encouragement.
Wayan walks about an hour to his lessons because the family can’t afford transport, or sometimes he bikes. If it’s late and he’s tired when he finishes practice, sometimes he sleeps by a statue in one of the villages. His motivation towards excellence is very strong.
Wayan has even moved to one of Bali’s top Gamelan schools, and will soon be followed by Made when she is old enough. This has only happened thanks to the sponsorships from BCP.
At a recent competition for the Gianyar Regency, Made Ema won a trophy for third place in the Primary School division, and Wayan Anon won second place in the High School division. Wayan Anon has also been invited to be the Puppet Master at a special performance of Balinese Gamelan at the Museum of Puppets and Masks.

It’s heartwarming to see their dedication and to know that BCP has helped them follow their dreams through school sponsorship.