Our Sponsorship Waiting List of children needing sponsorship is regularly updated. Please see below to see the children and read their stories. You can help change their lives. To sponsor, click here and remember to name the child you would like to sponsor in ‘I want my donation to be dedicated: NAME OF CHILD’.

Please set your sponsorship to ‘monthly’ and $40 USD. 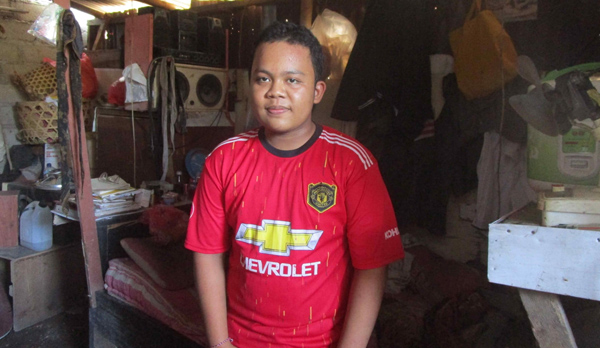 Gede Oka, 16, is the youngest of five. He’s in 10th grade, the first year of Senior High, living in Denpasar. He studies Hotel Accommodation.

Oka has two older brothers and two older sisters. The oldest is married. The second, third, and fourth are not married yet and they work as laborers. His father is an elderly man who still works as a construction laborer, but recently got into an accident and broke his hand. Since they don’t have insurance or money, he was only taken to a masseur. Oka’s mother passed away four years ago due to brain stroke and diabetes.

Currently, Oka owes his school $100 for his admission fee. If he doesn’t pay it by the next semester, Oka will have to drop out of school. Oka aspires to become a chef. 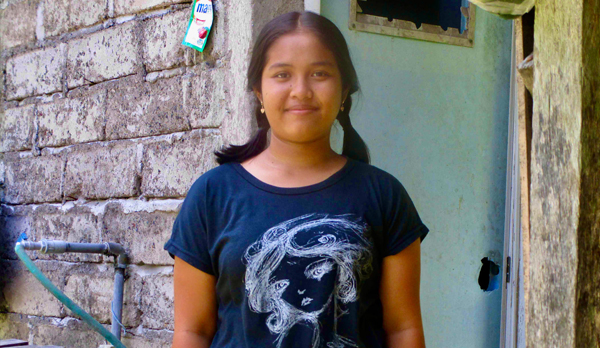 Wahyuni, 13, is the middle child of a famiy in Jembrana. She has an older brother and a little brother. Her father works as a laborer, while her mother stays at home and makes offerings to be sold in the market.

Wahyuni almost dropped out of school this year after graduating from primary school. She’s now in 7th grade. Her family took out another loan just in time, but they won’t be able to gain another loan, meaning Wahyuni will drop out unless a sponsor comes along. 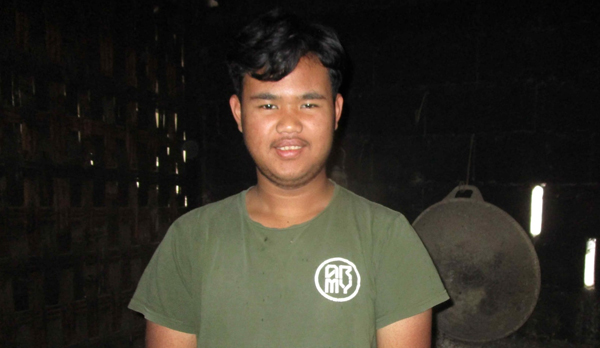 Vikram, 15, is the older of two brothers in Bangli. He’s now in his first year of High School. His little brother is in 2nd grade, and he lives with just him and their father.
His mother passed away from an illness when he was in the 4th grade, not long after giving birth to his little brother. Since his father has to work as a laborer, Vikram has been taking care of his little brother. They also often join his father by working as laborers during their day off from school.
Vikram aspires to become a famous painter. That’s why he chose to go to a faraway school from his hometown in a different regency. His major is Modern Art Painting in Sukawati – an area famous for art. 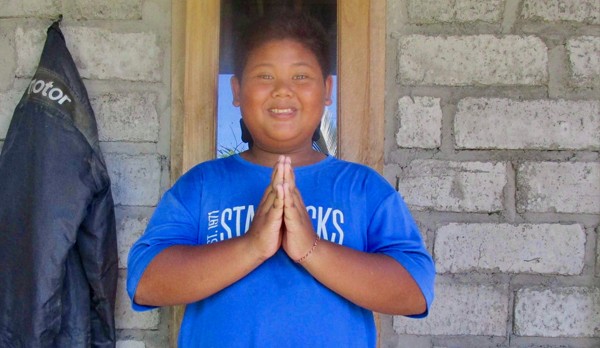 Mang Hendra is the youngest of 3. His sister dropped out and is now married and his other sister is sponsored through BCP. They live in Jembrana in the far northwest of Bali. Mang Hendra is now 11 and in grade six. Next year is Jr High, and school expenses start to really increase.

Mang Hendra’s parents are poor. They only graduated from primary schools themselves. They work as laborers and earn only enough to cover their basic needs. During this pandemic, they struggle even more to find work.

Currently, his parents have around $130 debt to the local bank to afford his school supplies and expenses. They can not afford to borrow more. Hendra will have to drop out of school next year after graduating from primary school if he doesn’t get sponsored. 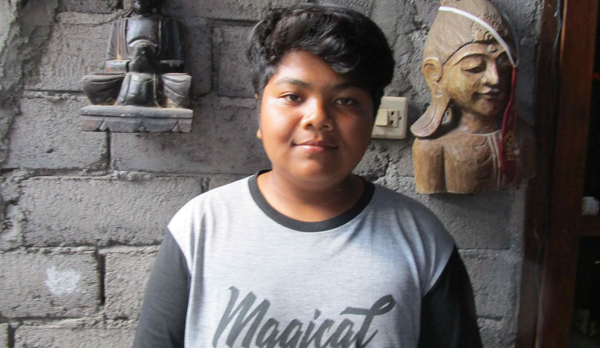 Juna, 12, is the younger of two. He’s now in 7th grade, the first year of Jr High. He has an older sister who’s already married after completing just junior high school and lives separately.
Currently, Juna lives only with his father in Tabanan. Juna’s parents separated when Juna was a 3rd grader. Juna’s father used to work as a motorbike taxi driver by purchasing a motorbike in installments. Unfortunately, Juna’s father could not pay the monthly installment in time, so the dealer took the motorbike back.
Currently, his father works as a laborer and could only earn around $40 to $60 per month during the pandemic, which is only enough to afford food for him and Juna. If Juna doesn’t get sponsored, his father would plans to have him drop out of school next year so Juna could help by working as a laborer instead. 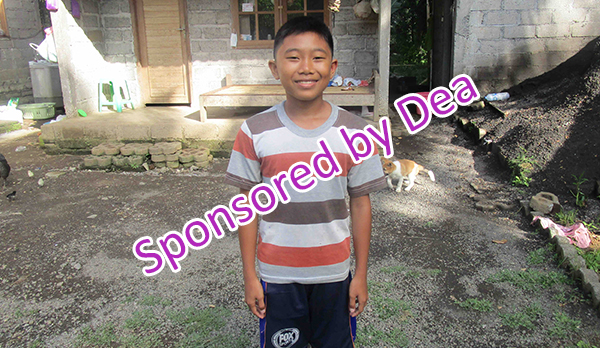 After Mang Jati’s father passed away when Mang was in grade 2, his mother has been doing her best to raise Mang and his two siblings.

Mang Jati is the youngest of three. He has an older sister and an older brother who only graduated from junior high school, but never managed to stay on to senior high due to costs.

Both his siblings and his mother work as day laborers and earn way less than the minimum wage. Mang Jati’s siblings barely earn money to buy food and pay off their family debt, which was incurred to fix their house. There is no hope to pay Mang Jati’s school fees too.

He hopes that one day he can get a work in tourism and earn a good income for his family. 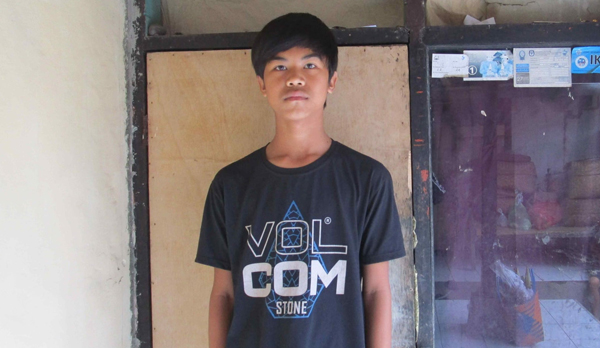 Dedi, almost 15, is an only child. He lives with his mother and 5 other extended family members Tegallalang.

His uncle is mute and isn’t married due to his disability. He works as a wood carving laborer. His grandparents used to work as laborers for other people in the rice field, but they’ve been sickly and are unable to work. His mother works by making ceremonial decoration and offerings for their relative.

His mother is mostly the main bread winner for his family as of now to provide food for the family. His father left him and his mother when he was three months old. Dedi’s mother is planning to make Dedi drop out of school after he finishes his junior high school education in June next year, as she doesn’t have the money to enroll Dedi into a senior high school, and she couldn’t take more loans.

Apri, 18 from Gianyar, is the older of two sisters. She has a little sister in the third grade.

Around a year ago when Apri was in the 11th grade, her father passed away after falling in the bathroom.

After her father’s death, her mother has had to work as the sole breadwinner by working as a paint laborer. When her mother receives a job, she earns $2 per day. Since her income is not enough, her mother often borrows money from their neighbor. 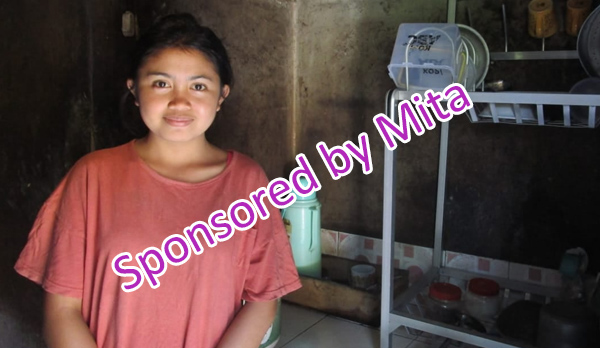 Ranti, age 18 from Gianyar, is an only child. Her mother got divorced from her biological father when she was three months pregnant with Ranti. Her bio-father had already gotten remarried by the time Ranti was born and he never once visited Ranti. 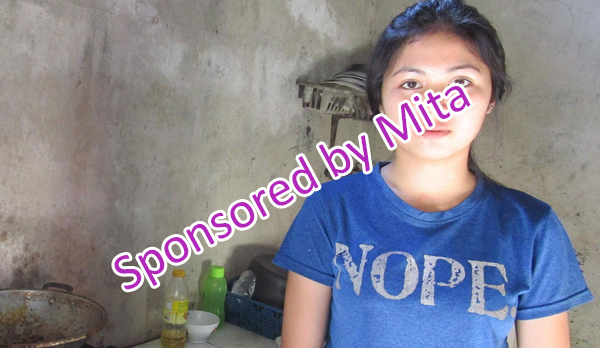 Wayan Dion, 18, from Gianyar, is the older of two. She has a little brother in the seventh grade or first year of junior high school. 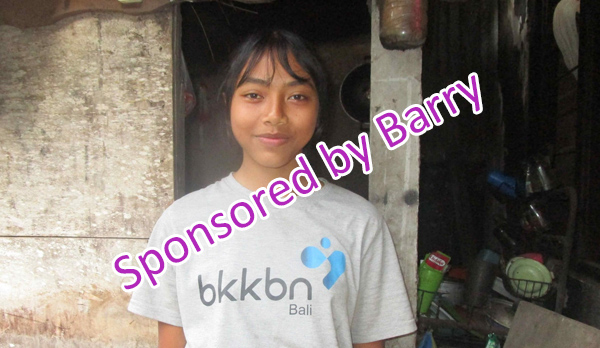 She aspires to become a chef due to her hobby, which is cooking. Ti Ayu Kadek is often tasked to cook for her sisters while her parents are working. She came to like it and would love to pursue a career in culinary arts if she gets the opportunity.

Due to her family’s poverty, Ti Ayu Kadek has to help her family by working as a laborer when she’s not busy with her school and study. Both of her parents are laborers who earn below the minimum wage. They earn only enough to afford their food and basic needs. 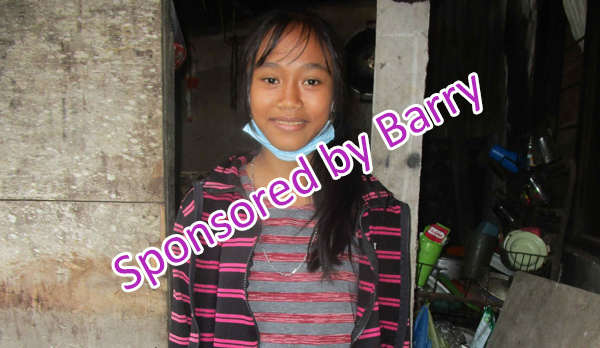 Ti Ayu Komang is the third daughter out of four from Kintamani. She has two older sisters, who are in senior high school, and a little sister, who is not of school age yet.

However, Ti Ayu Komang is aware of her family’s poverty and is feeling really bad for wanting to continue school. She’s feeling resigned if she has to drop out of school next year, because she doesn’t want to further burden her parents with more school debts. Even now, both of her older sisters are still in debt with their schools. 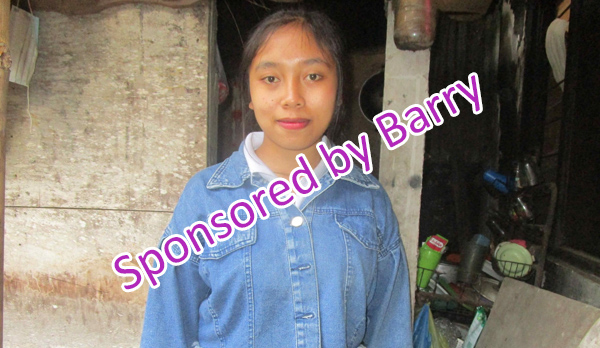 Ti Ayu Putu, 18, is the oldest of four sisters. The youngest is not of school age yet, while the other two are in junior and senior high school, who both also need sponsorship.

While Ti Ayu Putu only has 6 months left to graduate from her senior high school, she has never paid her uniform fees and the last nine months of monthly school fees. In total, Ti Ayu Putu is in debt for about $190 to her school. She will have to drop out this month if she doesn’t pay off her debt.

Her family also has debt around $170 to their neighbor. They used the money to pay for the girls’ school supplies and fees.