Great news in that 15 year old Kenan has been sponsored by supporter Liz. Kenan’s life had been rocked by his father passing away and he had to move into a new home. Now his final years of school are secure.

Kenan’s father sadly passed away in July. He has since had to move in with his Auntie, who struggles to pay for her own two sons school fees. Kenan is in high school, but faces dropping out if the funds aren’t found to keep him there

We were deeply saddened to hear of Kenan’s father passing away. It rocked the family and brought about huge change for Kenan.

His mother earns very little as a maid in Bali’s capital city Denpasar. She can’t afford to feed her children and had no choice but to ask for help from her family.

Kenan’s auntie kindly took him in – a huge commitment considering she herself is trying her best to put her two sons through school. As she couldn’t look after Kenan’s younger sister, she had to move to neighbouring island Lombok, where her uncle ‘adopted’ her.

Kenan’s auntie is a single mother, who is working so hard to provide for the boys, but she needs help. School fees, (especially for 15 year olds) are high. There are entry fees, extra class fees, school materials, equipment and many other costs required.

It is part of the reason so many children fall out of school – their families simply can’t afford it. We are determined to make sure this doesn’t happen to Kenan, who has already had a turbulent time lately.

Kenan is a bright young man, who is so good with musical instruments, he wins contests (and uses the money to pay for school). We would love the sponsorship to help Kenan follow his musical talents and gain special lessons on top of school.

We are so pleased to have found a sponsor for Kenan in supporter Liz. We were extremely worried about him having to drop out of school following his fathers death. The pressure has now been eased and we will be able to ensure Kenan finishes high school.

Liz decided to support Kenan after reading his situation. We hope the sponsorship will help further inspire Kenan to create music, win chess tournaments and secure a job after school.

There are many more children like Kenan who are on our sponsorship waiting list. Or if you are have any questions please get in touch. 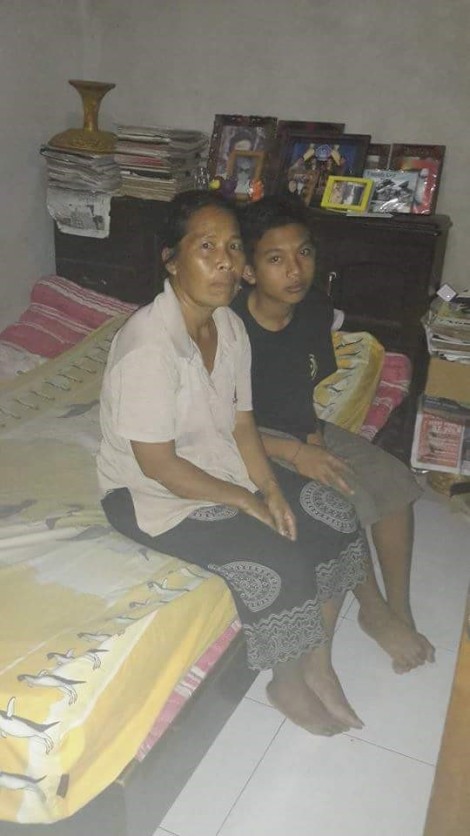 Below is Kenan’s translated letter

My name is Kadek Kenan Ray Lokha. Just call me Kenan. I am a 15 year old boy. I am in grade 1 of senior high school in the Buleleng regency of Bali.

I I was born and grew in Banyuatis village, another part of Buleleng regency that is about 3 hours drive from where I live now. But since my father died on 14 July 2015, I have been adopted by my aunty. She felt pity on me because my mother is just a housemaid in Denpasar city and I have 3 siblings (one brother and two sisters). My aunty is a single parent. She has her own two sons and has to pay for their schools. And again, with struggle, she helps me with my school and my life. She doesn’t want me to stop school.

My late father’s house in Banyuatis village is situated in the middle of rice field. It is very filthy and not well-treated. We used to do our natural duties in the river. Food was also a problem. Sometimes I ate and sometimes not, because there was no family. My mother is in the city, my eldest brother working in another city, my eldest sister already got married and lives with her husband and my younger sister is also adopted by my uncle who lives in Lombok across the sea.

In the aunty’s house, we don’t have problems with food and there is one toilet. Only water is a problem. Aunty buys water from a truck monthly.

My hobby is playing chess and playing Balinese musical instruments. Many times I won chess competitions and the money I got from it I used to buy books.

After school, I help my aunty feeding her pigs and chickens. In the afternoon I train at chess. My favorite subject is English. I really wish to continue my study and become an English teacher in the future. Hope someone will be inspired to sponsor me. May God guide me and all. Thanks.