Having been on the edge of losing her life, Agung Anak Dewi found strength in her bond with her dogs. Now healthy and happy, she’s hoping to find a school sponsor. 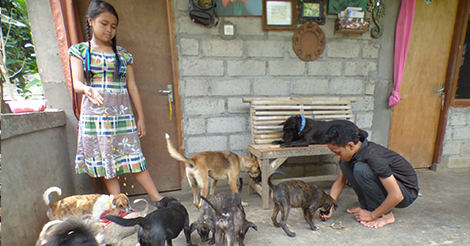 ***UPDATE 6th February 2016 – Agung Dewi has kindly been sponsored by Enterprise Systems. Her brother Agung Parameswara is still waiting for a sponsor. ***

Anak Agung Dewi Laina Pertiwi is 12 years old, in grade 7 in Mas, and already has an incredible story. 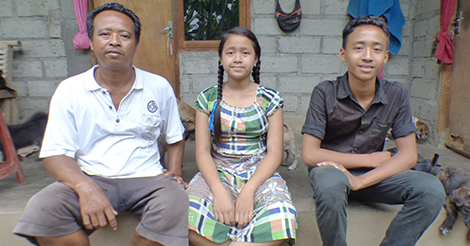 behind how she ended up adopting so many dogs over the year and loving every one of them.

Life on the Line

When she was in grade 4, she got food poisoning from expired bread. Her food poisoning was almost fatal, in that she went into a coma and she was foaming at the mouth. She even lost consciousness for 3 days in the hospital and all concerned feared for her life. 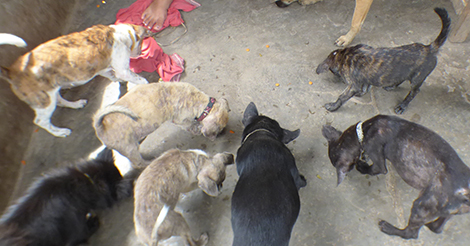 In a bid to help Dewi feel better, her father brought her a puppy in the hospital. While still unconscious, the puppy kept licking her face. When Dewi gained consciousness, she felt the puppy had saved her life. She felt grateful and indebted to the puppy ever since.

From then on, Dewi started to adopt every single stray dog that she managed to find. She really loves her dogs. She often puts her dogs

first, because she’s afraid that her dogs will follow her and get lost, or worse get hit by a vehicle. Since she started taking care of dogs, she hasn’t gotten any illness.

Agung Dewi’s efforts are wholeheartedly supported by her family, who help in rescuing, feeding and caring for the dogs.

Her dog’s meals are funded by 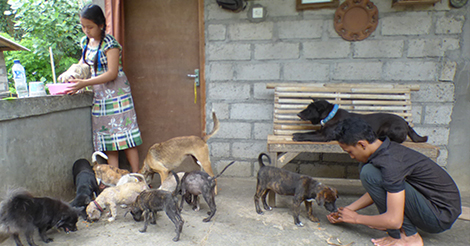 She’s passionate with her study and loves going to school. Unfortunately, it’s likely that she won’t be able to continue to High School due 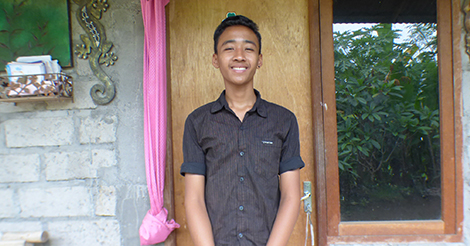 high fees. Dewi lives with her father, mother and brother in their rented basic house.

Dewi’s hobby is dancing and her after school activity is taking care of her many dogs. Dewi has a lot of friends, but she seldom goes out to play with her friends. Her friends often come and visit her house instead.

Her dream is to be a policewoman, although she has a talent in drawing. Her favorite subjects are Social Science and Science. Her hobby is dancing and she loves it.

Her love and connection to dogs and rescuing strays is extremely rare in Bali, and Agung Dewi gained some fame last year when she was featured on BBC Indonesia (see below). She is now at the age where school costs really kick in, and we hope a sponsor can be found for her.

You can read Agung Parameswara’s page on Agung Dewi

Can you Sponsor Agung Dewi?

Despite international publicity, Agung Dewi does not have a sponsor for school and like her brother, would be at high risk of dropping out.

You can sponsor Agung Dewi by going to our donate page, setting up a $40 USD per month donation and marking your sponsorship ‘FOR AGUNG DEWI’.

You’ll receive regular updates on how your support is helping Agung Dewi and are welcome to visit/request information.

More information on how and why sponsorships work is available here.

We thank all those who have helped Agung Dewi and Agung Gede and hope that sponsorship can be the final piece of the puzzle in helping this caring family.