Pasek Sinta has been through an awful lot. After her dad passed away, her scholarship was not enough to keep her in college – she would be forced to quit. But now that has all changed.

We were deeply saddened to her Ni Luh Pasek Sinta’s story. After her father passed away in a fatal traffic accident, life was never the same again. 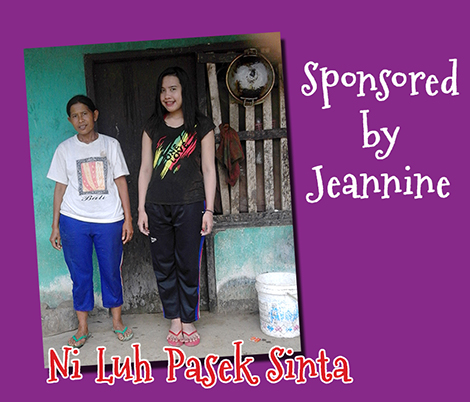 Being from a low income family, things got worse as she struggled to pay for her living costs. An incredibly intelligent young lady, Pasek Sinta had already gained a scholarship to a top Bali college in Jimberan. She was first in her class and excelled academically.

It has been her dream to make something of herself ever since she was young. Pasek Sinta worked hard through school, gained excellent grades and came out with a scholarship in accounting. It looked as though she was destined to achieve all her dreams.

However, the sponsorship only covered tuition fees, with nothing for living. When her father passed away, it not only took it’s toll emotionally, but affected the family financially. Pasek Sinta could no longer afford the high associated fees with college. 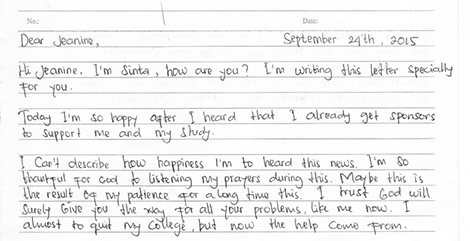 She tried everything to keep up with costs, taking night jobs to pay for living expenses, but soon got sick due to her overexertion. She was told she could not carry on that way. It felt like life had given yet another cruel blow.

It meant Pasek would have no choice but to drop out and give up on her dreams of becoming an accountant and making her family proud.

But that didn’t stop Pusak Sinta from aiming for the stars. Such is her dedication to achieving her dreams.

Everything changed when we heard about Pasek Sinta after a plea for help. Although we focus on providing basic schooling for Bali’s youngsters, we felt deeply for Pasek Sinta’s situation and committed ourselves to help her. 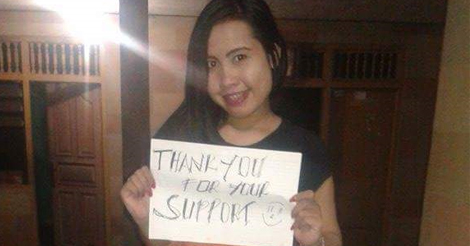 But we couldn’t do it on our own. What makes Bali Children’s Project what we are is our supporters. And supporter Jeannine has been a constant help.

When Jeannine heard Pasek Sinta’s story (through reading out Facebook page), she wasted no time in sponsoring her, despite the fees being far higher than standard sponsorship.

Pasek Sinta was bowled over when she heard the news. In her own words, she had thought that life had been unfair on her. Pasek Sinta wrote a long letter to sponsor Jeannine to tell her just how much it means to her and her family.

We are honoured to be able to have a hand in Pasek Sinta’s change of fortunes. It is only thanks to support from Jeannine and Pasek Sinta’s refusal to let life beat her down that has enabled this happy outcome.

If you can help change a child or young adults life forever, please get in touch or take a look at the other children awaiting sponsorship here.