Wayan Gunawan received a special surprise when sponsor Myrna came to visit. Myrna came to see how the sponsorship was helping, as well as a few great gifts to help inspire Wayan.

Wayan Gunawan’s father died 7 years ago from a heart attack, and 3 years later his mother re-married. She then moved in with her husband’s family as is the custom in this culture. 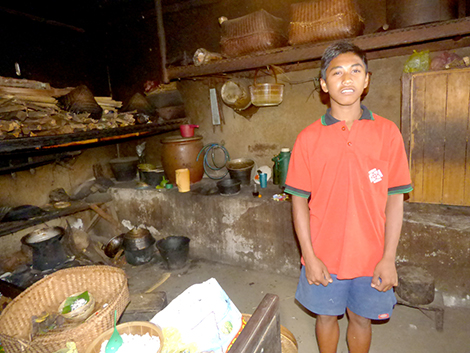 It left Wayan and his sister (Novianti – who is also sponsored through Bali Children’s Project) to be raised by their elderly grandparents, very poor rice farmers. To help with costs, Wayan works on weekends in a market, carrying large bags of rice.

Village leaders, worried about Wayan and Novianti, got in touch with us and asked if we could help them. It was because of their extreme poverty and the desire of the children to go to school.

Being 15 years old and in high school, costs stack up more than ever. There are numerous fees to pay if children are to stay in school. Wayan would likely have dropped out, but thanks to the sponsorship, he is now continuing school and is in grade 10. 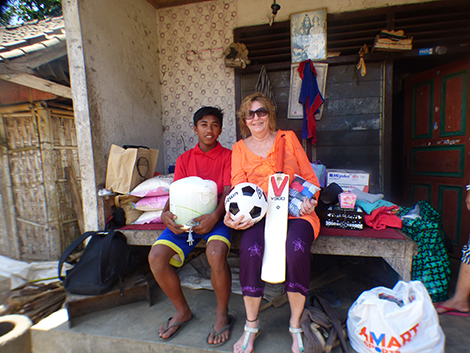 So you can imagine how great it must have felt when Wayan was told that Myrna had sponsored him.

Not only that, Myrna actually came to visit Wayan. Myrna got in touch and we were more than happy to show her what a difference she is making.

Assisted by our stalwart Program Co-Ordinator Gede and Area Co-Ordinator Ayu, Mryna travelled off the beaten track to Bangli to see Wayan in his compound.

It was understandably quite a daunting to meet the lady who is helping him through school, but after a while Wayan broke out a smile we never knew he had (he previously always looked sad).

More happiness followed as Mryna unpacked all the gernous gifts she had brought for Wayan and his family. 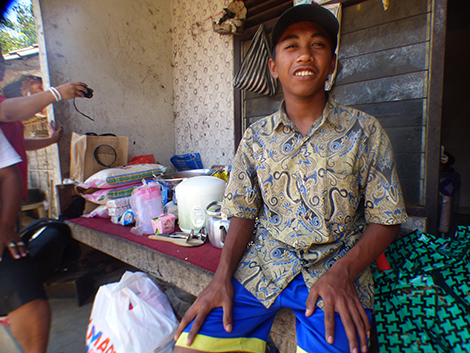 It was an unbelievable amount of items that Wayan and his family really neeed. There was practical items like a brand new rice cooker, as well as many bags of rice, as well as plenty of sports equipment so Wayan could enjoy fun and games in his spare time. Myrna bought even more donations – clothes, kitchen equipment, tea and other food.

Wayan could hardly believe it. But the highlight came when Mryna presented chickens (yes, you read correctly – chickens!). Myrna purchased the chickens from the local market, giving them to Wayan so his family can have an ongoing supply of eggs.

We can’t thank Myrna enough for visiting and showing Wayan that she is there for him. It is only thanks to people like Myrna, and the people who support the work of Bali Children’s Project that we can help children that are most in need. 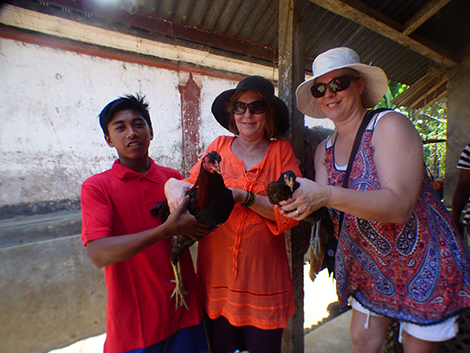 We encourage any sponsor to visit the child they are helping and see first hand what their support is enabling.

If you are interested in sponsoring a child please see our sponsorship waiting list, or get in touch.