To Bali with Love

To Bali with Love

We’ve been incredibly moved by the kindness of Luh Desi Ani, who has sponsored our ‘child of the month’ Kadek Widiada. We had been searching for a sponsor for Kadek since February 2015.

Luh Desi Ani’s parents managed to support her through school, enabling her to follow her dreams and move to USA. She saw Kadek’s story and decided to help.

Kadek Adi Widiada, from the mountains of Munduk in Bali really needed help because the parents could no longer afford to pay for the school any more. Kadek’s family have very little monthly income. His father has had to stop work due to sickness and his mother barely earns enough to feed the family, as a rice field worker.

Luh Desi Ani got in touch and sponsored Kadek as soon as she heard about his story. She wrote us a note about why she wanted to sponsor Kadek…

“I live in Los Angeles California now. There are not many Balinese here either. Most of my Balinese friends are living in the east coast. I like the weather here in California because it’s more like the weather in Bali. My parents are “dagang bakso” or meatball sellers. You know, the one with the cart going around the village? Hehehe… They managed to get me and my siblings graduated school. I really think education is really important. But the truth is not many balinese kids can afford that. I just want to help as long as I can.”

Kadek is a bright young man who is keen to learn, but will need a sponsor to ensure he can stay in school.

He lives with his mother and father in a basic house, sleeping on a small mattress on the floor (pictured).

We are so moved by the kindness of Luh Desi Ani for supporting Kadek.

Many children from poor families never graduate as their families struggle to keep up with costs. We are always seeking sponsors for children her don’t have the luxury of being able to access school. 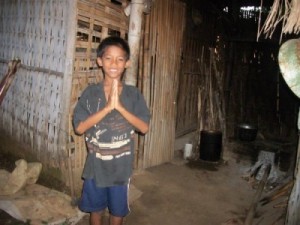 You can see our waiting list of children or find out more about sponsorship here.

Here is Kadek’s letter asking for someone to sponsor him:

Hello my name is Kadek Adi Widiada. I am 10 years old and I am in the grade 3 of Elementary school in Ringdikit. My village is Ringdikit village.

In my family I have an older sister. Her name is Putu Apriani. She is 14 years old. The subjects the I like mostly in school are Balinese and Math. I want to be artist when I grow up. My hobby is playing football. 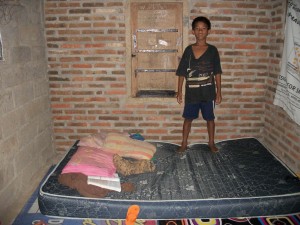 When I have spare time after my school, I like to help my parents, especially my father because he is sick. If I graduate from HighSchool, I would like to go to college. My favorite color is red. The name of my father is Kadek Darmawan. He is 40 years old. He has no job because he’s sick since he had an accident about three months ago.The name of my mother is Luh Serining. She is 36 years old and she is a farmer.